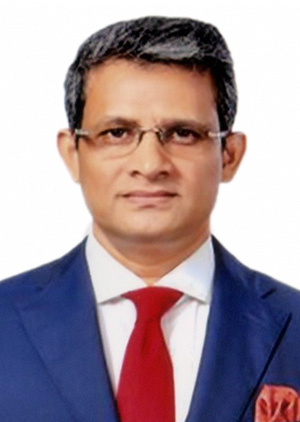 K M Tanjib-ul Alam, Senior Advocate, Supreme Court of Bangladesh, was born in 1974 in Chattogram. He graduated with LLB honors from University of London in 1996 and was called to the Bar of England and Wales from prestigious Lincoln’s Inn, UK in 1997. Currently, he is the head of the chambers of Tanjib Alam and Associates, an international law firm with offices in Europe and Asia. In a long and outstanding career, apart from being an international arbitrator and a leading corporate and constitutional lawyer, Mr. Alam has served as a legal consultant or performed advisory roles including for International Finance Corporation (IFC), PricewaterhouseCoopers (PWC), Dhaka Stock Exchange (DSE), UNDP, Institutional Reform International Inc. (IRIS) USA, The World Bank. He played pivotal role in drafting two key legislations while acting as the technical consultant for the World Bank funded projects on the reform of Energy and Telecom sectors, which resulted in the enactment of the Bangladesh Energy Regulatory Commission Act and the Bangladesh Telecommunication Act.  As the lead Project Consultant of IFC, Mr. Alam prepared the draft Companies Act as part of technical assistance to the Government of Bangladesh for the reform in corporate sector of the country to attract froeign investment. Mr. Alam is well-known for his acumen as one of the best lawyers of the country. He has won numerous awards from multiple foreign organizations for his contribution in the legal profession of the South East Asia region.