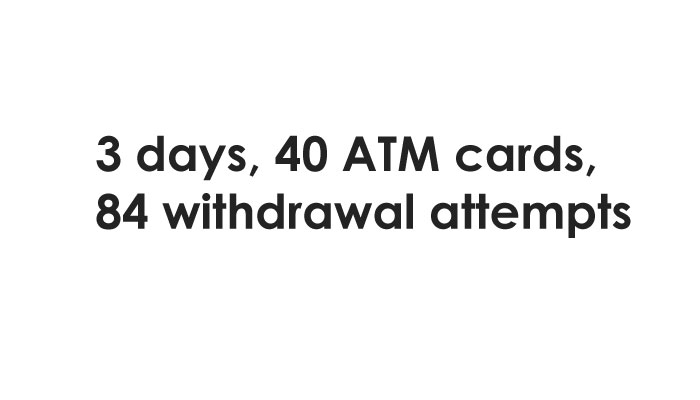 Credit card frauds busted in Dhaka, one a Turkish national

Cloning credit card of citizens of around 40 countries, a transnational syndicate has been withdrawing money from ATM booths of different countries.

The syndicate -- with members in Turkey, Bulgaria, Mexico, India and Bangladesh -- has been involved in the crime for at least the last two years.

After collecting users' credit card info through the dark web, they collect the money from POS machines with the help of hackers. Sometimes, the syndicate even clone the cards.

Counter Terrorism and Transnational Crime (CTTC) unit yesterday claimed to have obtained the information following the arrest of an international and local member of the syndicate on Tuesday night.

Hakan came to Bangladesh on December 31 with a business visa. Mentioning the purpose of the visit as "garments business", he was staying at a hotel in the capital's Paltan.

Between just January 2 and January 4, he attempted to withdraw money with the cloned cards 84 times. The cards are from around 40 countries, including US, UK, Australia, New Zealand, Germany, Canada, Saudi Arabia, and Spain.

But when he tried to withdraw money at an Eastern Bank Limited (EBL) ATM, he was thwarted by the bank's anti-skimming protection, said Asaduzzaman.

A high official of CTTC unit involved with the investigation said he was planning to leave the country soon.

"Hakan first tried to go to Malaysia. But failing to do so, he was about to fly to Pakistan," said the official quoting the Turk's statements at primary interrogation.

This is not the first time Hakan visited Bangladesh.

Earlier, he visited the country in 2016, 2018 and 2019 on business visa but never stayed over a week, "We are suspecting he had success withdrawing money from here, which is why he came again," said Asaduzzaman.

"We are now looking for syndicate member Sakib alias Saber, a suspected Indian national, who is believed to be hiding somewhere inside Bangladesh," he added.

Addressing a briefing, Asaduzzaman said Hakan had been arrested in Assam in 2019, along with five others, for embezzling around 10 lakh Indian rupee in a similar manner.

He was in jail for about 20 months and fled while being treated at Govind Ballabh Pant Hospital under custody.

He later went back to Turkey through Nepal, taking help of an Indian syndicate, spending around two lakh Indian currencies, said Asaduzzaman.

About Mofiul, CTTC said his brother Rafiul Islam was among the five arrested in India with Hakan in 2019. Mofiul was in Malaysia from 2001 to 2008, said investigators.

Investigators said they have got names of some syndicate members hiding in different countries. One of them has been identified as Romel, hiding in Delhi, they said.

Contacted, Tohidul Islam, additional deputy commissioner of CTTC unit, said, "Once the names are verified, we will seek help from Interpol."

Eastern Bank Limited (EBL) Chairman Md. Showkat Ali Chowdhury inaugurates a new branch at the Dhanmondi Residential Area in the city today, May 12. This is the third branch of the bank in the area.

Eastern Bank Limited (EBL) as the mandated lead arranger has successfully raised BDT 1,200 crore in the form of Syndicated Term Loan Facility for Banglalink Digital Communications Limited, one of the leading telecom operators in Bangladesh. A total of 17 banks participated in the landmark syndication

Japan is Bangladesh’s most trusted friend and biggest development partner. Japanese investor can now take advantage of Bangladesh capital market as the return on investment is very high.

Visa Worldwide Pte. Ltd. (Visa) partners with Eastern Bank Ltd. (EBL) to roll out a unique solution by offering Trustee Services to its clients in Bangladesh to address the domestic settlement issues by maintaining cash collateral with the Trust.